This is the first vegan cookbook I ever used. I got it from the library. I wasn’t at all interested in becoming vegan at the time but I was aware that we were relying too much on using cheese and thought that eating the odd vegan meal might help us both lose a bit of weight. (I’m ashamed to say that back then I thought that if the animal didn’t actually die it wasn’t hurting. Idiot.)

This is one of my few English vegan cookbooks, so there’s no need to covert measurements. I’m perfectly used to doing it now, and in fact, I prefer using cups, but back then I probably wouldn’t have been so that was a plus for me. Also, then, I would never have heard of seitan, tempeh, black salt, kombu, miso, berebere, or many of the other ingredients that I now use regularly, so it was good that this is a fairly basic, simple book. It also uses hardly any dairy substitutions, so it was good for us then because we didn’t need to buy different butters, yoghurts, or milks. Now I’ve written those sentences, I’m starting to wonder what on earth must be in it! But it’s got plenty of dishes in it that I’ve cooked again and again, so it must be doing something right.

Like many vegan books, it annoyingly doesn’t have any pictures in it, and also, to me, a few of the main courses are in the starter section, and vice versa but that doesn’t matter much.

I do tweak the recipes, but if you’d like to try some of my favourites, I love:

This is a great comfort meal, taken from Amanda Grant – The Joy of Vegan Cooking. It’s basically mashed potatoes with garlic olive oil and wholegrain mustard in, served with spinach and red onion cooked with cumin, coriander and lemon. I also add some chickpeas in with it, as I think the flavours work well together and gives the dish an extra protein boost. It’s nice for days like today when it’s a bit cold and dark. 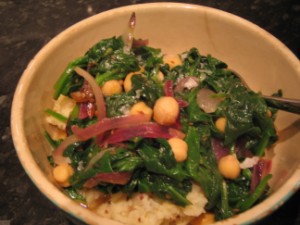