Another friend took me up on my October vegan challenge! I know Rachel can cook brilliant vegan food because she’s done it before but I was curious to see what she might cook for her family if I wasn’t there. She did cheat a bit because she waited until her notoriously meat loving husband was away, but since she’s got 3 young children including very active twin boys, I’m full of respect that she eats anything that isn’t a pot noodle. 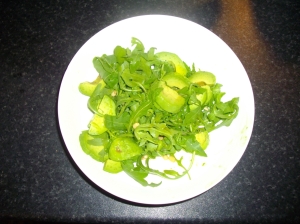 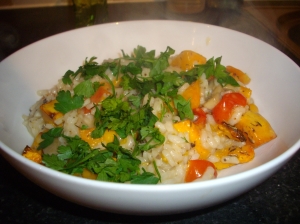 Ha, she’s got the same dishes and nearly the same worktop as me but I swear she took these pictures and sent me them!

Here’s Rachel’s description of how she made it:

Put simply (and to be fair it had to be simple as I got back from helping at Beavers at 7.15pm and had to look in the fridge for inspiration…) it was a load of butternut squash chopped up and roasted with olive oil and thyme for half an hour at about 180. 10 mins before the end I chucked in some halved cherry tomatoes (about eight). In the meantime, I fried up some mushrooms and garlic in olive oil, added my risotto rice and then my veg stock, salt and pepper. 2 mins before it was ready I chucked in some left over coconut milk from a Thai curry from late last week….. Twas delish with a salad of rocket, toasted pine nuts, avocado and a smidge of sherry vinegar and olive oil. Infact, I couldn’t eat it all!

Well, I’ve been cooking vegan food for a long time now but I don’t think I could come up with that at the end of a busy day. Thanks for taking the challenge Rachel! Maybe one day you’ll dare to feed vegan food to your husband???