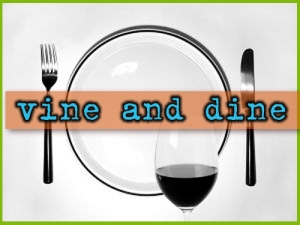 I was very excited to move to Voluptuous Vegan for our Vine and Dine challenge, as, unlike the other books we’ve used so far, I’ve used this book quite a lot and loved what I’ve made from it. The recipes aren’t things you can knock up quickly when you get in from work but they reward the time you put into them with interesting, unusual and flavourful combinations. I bought this book way back before I was even vegan, so it’s stood the test of time remarkably well.

The chickpea crepes had been on my to-make list for a long time so I showed no resistance when Tami picked this one. My time spent living in Russia has left me with a love of dill and caraway, and now that I’ve got a stash of horseradish, which can be difficult to find here, I was very keen to make this dish.

I had a few problems with the crepes. As per usual, I had to throw the first one away but after that although they were fragile they worked well. They were nice and rich and I’d make them again. (The curried chickpea tart  is one of my favourites from that book so it’s no surprise really). The stew inside was tasty but not quite as knockout as some of the other dishes I’ve made from this book. I liked this meal – eating almost anything inside crepes makes for a fancy meal and makes me feel like a domestic goddess, but it didn’t blow us away like other things I ‘ve made.

Chick pea pancakes, shitake mushrooms, cauliflower, horseradish cream, dill, rocket: this recipe probably explains why nobody has ever published anything much good about wine and vegan food. Just which of these flavours should you try to match, and what will clash violently? When in doubt, we tend to follow Denis Cotter’s advice and just have a wine we’d really like to drink. In this case we chose a bottle we’d both been looking forward to a lot, Vintage Roots Gigondas Clos de Joncuas, 2004, which at £19.50 a bottle is a serious wine from the Southern Rhone. Don’t get me wrong, the wine was delicious. The Grenache which is the dominant grape in Gigondas is a particular favourite of ours, and the bits of other grapes blended in just beef it up and give it that rounded and interesting quality. On a summery evening little beats quaffing a bottle of this with a plateful of something seasonal. However the flavour that completely killed it on this occasion was the dill, so much so that I seriously wonder what alternative would have worked. We agreed that the best thing to have with this food would have been a shot of vodka. Maybe a buttery Chardonnay – say a decent white Burgundy – would have been in with a shout, but I doubt that would have matched the meatiness of the shitakes? Basically, this dish would be a superb one for a sommeliers’ competition, and I for one would like to know the winning choice!