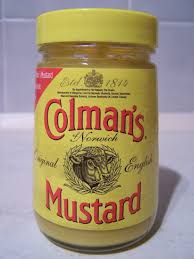 I love love mustard, in all its forms. My first introduction to mustard, like most people in this country, was Colmans English mustard, as shown above. If we were feeling really adventurous as a family we might use French, which was murky brown in colour and not as hot. That was it. I still adore English mustard though, especially on breakfast sausages or hash browns.

I had a short sharp shock introduction to the fact that there are other mustards out there the first time I made Pasta Alfreda from Vegan with a Vengeance. It uses quite a lot of yellow mustard and I thought it must mean Colmans, because clearly it’s yellow. Whoops. There’s a whole world of difference between the two, as I discovered when the alfreda sauce blew my head off. American yellow mustard is quite widey available here and is much milder and tangier. From trying out recipes, it seems that the Dijon mustard used in America is different than the sort we get here too. Ours is hotter, so if you’re in England and the recipe writer is American, I’d use less Dijon in recipes.

The other types of mustard I use are seeds and oil. Mostly, I use black mustard seeds in Indian cookery, usually for the tempering of curries (oil and spices are heated separately and poured on to the curry at the end). I love the way they pop and jump around. Mustard oil is widely used in some parts of India. Last time I was in Kerala I went to a cookery class, and the other lady there was from Bengal. There was quite a lot of heated debate between her and the cookery teacher about coconut oil versus mustard oil, and the bengali lady tutted every time the coconut oil came out. I don’t use the mustard oil too often but it definitely gives a different flavour to curries.